Phew… what a whirlwind October!!

I have been so busy in the last few weeks that I just haven't had the chance to blog.

My event with medium, Charles A. Filius… our "Third Annual Halloween Double Medium Event" was so much fun and was a great success - EVEN WITH A… SNOWSTORM!  What??????  Crazy October weather, but luckily it was big fat wet snow, so it wasn't too bad.  We sold out at 55, and then was granted permission from the hotel to move our food out to the lobby which gave us room for 15 more seats.  We sold out at 70!

This year, to change things up a bit, we decided to bring on-board a certified tarot consultant to do mini readings for the audience during Part II of our three part event.  I started first and gave messages from spirit for 45 minutes, then Tim Boyd conducted 30 minutes of mini tarot readings, and then Charles finished up the evening with Part III of more messages from spirit.  It was great to see the different styles and techniques in reading for the audience.

What I'm about to write is a lesson for us all… trust your intuition.  My first instinct was to call Tim, a Certified Tarot Consultant with 20 years experience, but knowing he's always so very busy around Halloween, I decided to call another person.  My mistake, as less than two weeks before the event, she chose a better gig and pulled herself from the event.  She kept citing it as a "once in a lifetime opportunity" but it was disheartening and disappointing after a verbal agreement was made and she was highly marketed as part of the event.  Lesson learned to have written contracts!!  She recommended Tim, but he was already the first person I was going to call anyway, and I did so as soon as I got off the phone with her.  Tim came through beautifully, and even delayed his trip out of town for a day just to step in.  Not only did THAT impress me, but this man knows how to work a room, and he was amazing.  EVERYONE loved him, so much so that I've invited Tim back for next year's event and I do hope he accepts.  What a wonderful soul, so it worked out as it should!!!

This year seemed to run much more smoothly than last year.  I took off three days prior to the event, chilled, focused, organized and prepared.  :)  I got to the hotel early and decorated alone in my thoughts by myself and I felt calm and collected.  Finished everything at 5pm and got ready and came out of my room surprised to see a HUGE line at 6:05 forming in the hallway already!  I even had two excited folks who arrived at 4:45 and sat waiting near the tables to get good seats!

A few folks to thank:

Will Stewart, as always, stepped in and checked everyone in.  Will is a great friend of mine, a student and a budding medium… he also collected all of the charity money after the event and helped in anyway he could.  Will gave messages afterwards that he received during the event to two separate people who were happy to hear them and who understood the messages.

Rob Gutro (oops, I mean "Superboy"), another great friend of mine, emceed and did so beautifully and with humor.  He is also a budding medium and gave messages to the audience afterwards that he, too, received during the event.  One of which was meaningful and poignant to a firefighter in the audience.

My husband, Mike and my boys, Brady and Bren stepped up with catering all the food, delivery, set up, clean up and even checking folks out who wanted to purchase my jewelry.

Thank you to all… we couldn't have done it without you!!!

Afterwards, we had food in the lobby, book signings, jewelry and meeting and greeting.  It truly was a wonderful event and such a success…. can't wait until next year!

OH!!!!  I MEANT TO MENTION…
During our event we conducted a silent auction to raise money for Bully Paws Pit Patriots a rescue group saving Pit Bulls from shelters and euthanasia.  Thanks to the very generous bidders, we raised $458.00!!!  Thank you, everyone!!! 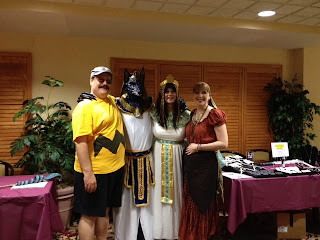 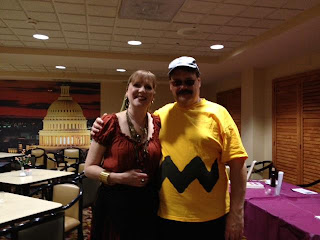 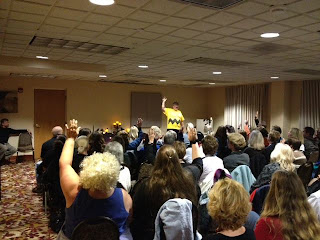 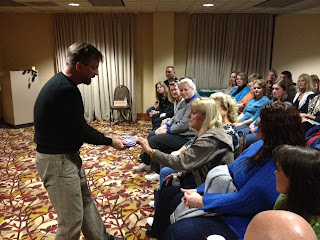 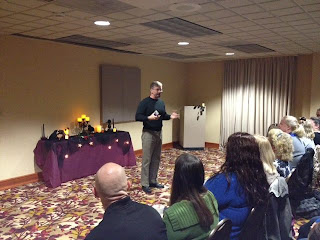 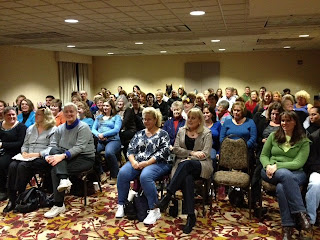 Our Sold Out Audience! 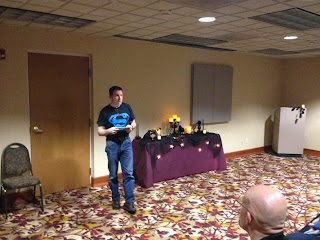 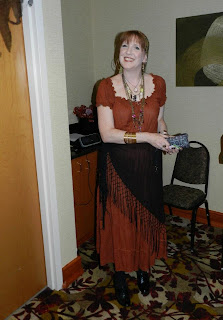