Meet Blade and the Bunny Mani/Pedi

Told you I'd be blogging more!  At the present time, the Madam Bun Bun is running by my feet and jumping on the couch trying to get my attention.  Ok, now the diva is nudging my ankle.  Time for attention, hoooman!  Bunnies NUDGE you with their boomplesnoots if they want you to pay attention to them, and sometimes, pretty hard!

Ok, she's fine now.  So today, I got two cool things in the mail.  One was an oval template to saw out saddle rings from Cabtopia on Etsy.  They sell tons of templates for stone cutting and for metal cutting.  Really cool.  THEN.... 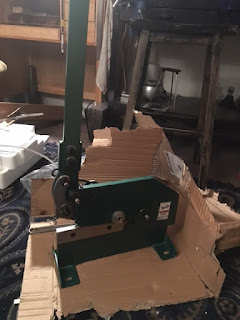 "What the hell???" my husband said confused, as he saw it constructed.  And then after I told him what it was, "this is turning into a mechanics shop."  I've named him "Blade."  Yes, I name my tools, or a lot of them.  LOL!

Don't be jealous, hubs.  I have more tools than you, sorry, and mine are way cooler.  Silversmiths.  Need.  Everything.

Hubs has been super supportive.  He watched me take over 1/2 of our basement, has carried in super heavy tools such as my rolling mill (his Christmas present to me), benches and he took me to go get my first big girl tank, "Tank," which replaced my little hand-held butane torch.  :)  He was the one who told me that he knew I was a more tired with my mediumship work and because of his new job, I could now cut back if I wanted to.

UPDATE:  This was written last night, as the bunz was ultra needy, probably because she sensed she'd be going to the vet today to get her mani/pedi.  Poor little thing.  We had to stay at the vet longer because she was really panting and breathing fast after her two minute nail trim.  She refused to let me take her out of her house until 10pm (normally 8:30), and now she's ignoring me, but giving Mike kisses.  Sheeze, guess she's mad at me, lol!

Tomorrow is client day, so I don't think I'll have time to make any pretties, but I'm going to try!  I have a few cuff and bangle ideas to try.  I've applied to the Richmond Spring Bada Bing for April 16, and hopefully I'll get to go!  Two perks with that... I get to see the Boo and sell some jewelry!

So, this is my second post of the day... I'm trying to get re-familiarized with Blogger, so bear with me!  First, I'm trying to "pretty" up my blog site, so it's a work in progress.  :D  It only took me 3 hours to make a header, lol.  Now, I think I want to change it already. :/

Second, I've had many people respond to my newsletter looking for an appointment.  Thank you so much for your interest!  The April 6 date has been taken, so as of now, I am completely booked through April 30. I'm taking the month of May off completely, but WILL be booking clients for June and after.  If you're interested in an in-person session, please give me a call sometime in May and we can see where we can put you in!

And finally, I've had so many sweet emails and comments saying that they were sad and felt this was "the end of an era."  Seriously... quite a few!  So heartwarming - thank you, truly.  Just cutting way back, folks, and changing the way I book and connect with you.  Shifting the energy to better align with where I am now.  :)

Have a wonderful week and talk soon!

Oh, here's a pic of the Madam's feet and bunny butt... you're welcome!  :D  Have a great evening! 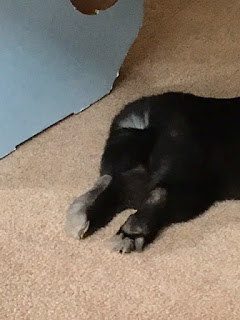 Posted by Barb Mallon at 6:20 PM No comments:

If you are one of my newsletter subscribers and you're checking out my blog, THANK YOU!  I'll be posting regularly, so please subscribe.  If you are just randomly here, thank you, too!

This is just a quick update as my last post was three years ago, and I didn't want you to think you were in the wrong place.  :)

Here is my latest and last newsletter!  See you soon!  http://eepurl.com/bTZu9n

-Barb
Posted by Barb Mallon at 1:51 PM No comments: